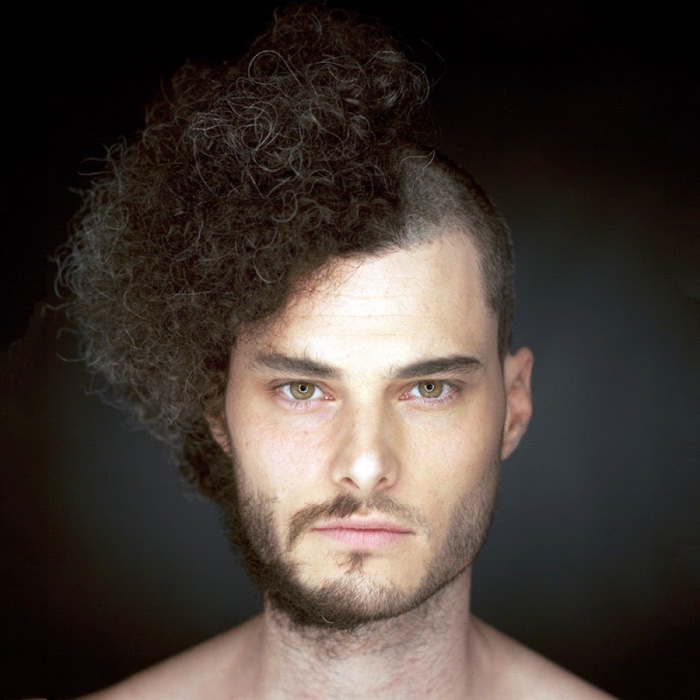 As a curly 14-year-old, Tracky Birthday played the drums on Germany’s Disney Club TV-show, while wishing he could sound like the 2 Live Crew or Ice-T. Some years later he dug out his Yamaha PSR-2700 for solo entertainers and became 1998’s secret lo-fi prince. When he got his laptop, he found himself able to sequence ukulele, congas, bongos, melodica, harmonica, jaw harp, saxophone, bass, guitar, didgeridoo, kazoo, flute, keyboard and turntable in a fair quality while touching his pipi. After adding midi tracks that mainly consist of cowbells and those “huh!” and “hoh!” sounds, Tracky’s parallel world was complete.
He was rocking them cheesy synth chords in his pijyama pants for several years, but something seemed to be missing. He boxed beats, cut and scratched that chhhh-sound, sampled cartoon sound effects- but still his music appeared to be lacking something… At a friend’s gig, Tracky got drunk and grabbed the microphone, started rapping gibberish (because he didn’t know any lyrics) while the crowd loved it and his friend hated it. From then on he added vocals to his tracks, developing a quirky yet fresh rap style. If tight lyrics could ride a bike Tracky Birthday would have to brake uphill! He even sings - but only when nobody’s home. Together with Pierlo he wrote one smash hit after another for their Primix For Kids album and played live shows in Germany and Italy.
After moving to New York to work for the Whitest Kids U' Know, Tracky and his friend M-Boy from Shake Your Tree played a fun webcam gig on Times Square. Soon after, The Discoghosts were born and M-Boy and Tracky recorded their album BAD which is also featured as a CD inside the book Shake Your Tree 3.

After having worked for Rhizome as an editorial fellow, Tracky just moved back to Stuttgart, Germany, where his friends Roglok and Vernon LeNoir live and his girlfriend is expecting his baby.
He hates making websites, shaving, hitting his head and clowns. He prefers making videos, drawing, taking photos, dancing, writing, David Hasselhoff, space-shuttles, dinosaurs, DeLoreans, safaris and dressing up as The Discoghosts. His right shoulder is very hairy while his left one isn’t growing any hair at all. Splendid.