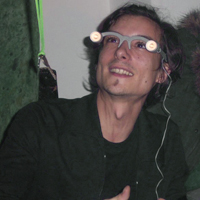 Toyz'R'me is the main moniker of french multimedia artist and musician Jean-Hugues André.
His musical career started in 1998 as a bass player and singer in the postrock band “Was kein Engel weiss“ in his hometown Dijon/France but got quickly more intensely intrigued by the means of computer assisted composition.
He appeared at The Consortium, for the pluridisciplinary arts festival “Nouvelles Scenes”.
In 2002 Jean-Hugues André moved to Paris and he became part of the Rolax label collective with which, after a few concerts together, he released his first ep with Komori, one of the founders of the label. During his stay in Paris he collaborated as well closely with the electronic legendary Andrew Sharpley, also known as core member of a&e, Stock, Hausen and Walkmen and Dummy Run. Parallely he continued his participation in diverse netlabel projects and net-based collectives such as Soulseek Records, Upitup Records, the Netstock festival, Binkrsh netlabel…
As a result of his engagement with soulseek records he is since then regularly invited to the lab30 festival in Augsburg/Germany, which is the first international netbased festival worldwide, involving the creative community of the soulseek network out of which amongst others artists such as Khonnor, Venetian Snares or Lakluster emerged. Ever since his name appears next to well-established artists such as The Sea and Cake (Leaf), Leafcutter John (Planet Mu, staubgold), Subjex (Planet mu, Schematics), Jason Forrest (cockrockdisco etc.), Cursor Miner (Mute)...
He played in locations such as Le Batofar and Mains d’Oeuvres in Paris, Le Beurs in Bruxelles, at the Lowland Festival in the Netherlands, El Garage in Ghant/Belgium, the Tipsycamp Festival, the Zentrale Randlage in Berlin…
Since 2004 Toyz'R'me works and lives in Berlin. He is involved in several collaborative projects amongst them with singer and electronic instrumentalist Caro Snatch, vocalist and bassoon player Sophie Bernado and artist and electronic musician Albert Bertolin alias glaznost. Toyz'R'me's music is meticulously composed. Tightly knitted sound structures, mainly produced with open source software such as Jeskola Buzz. Keyword is: utmost precision, be it in leg-schlagging breaks or elaborately programmed melodies.
His experiments with randomization processes, especially in the production of beats and harmonic schemes, lead to intrigueing and bewildering aural experiences comparable to its musical influences ranging from The 13th Floor Elevators to the electronic likes of Squarepusher and DSP-Breaks associated.
What makes Toyz’R’me’s Music so special in the end is probably the fact that each of his pieces has a different underlying technical and sensitive procedure. For Toyz’R’me it’s not about finding one’s way, but to be permanently reinventing it. The athmospheres of his pieces change from being light, childish, bouncing, elegiac and melodious to crazy rushing eclectic states with a vastly driving force that keeps the balance in the alchemy of chaos and order needed on a dancefloor.