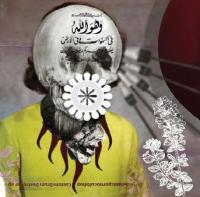 "A multiplicity of sound layers pierced by one single beat. That would be a simple definition to describe the complexity but straightforwardness of the music from this band from Osaka. However, there is no special Japanese flavor here, and it would be best if we could please once and for all retire these tired clichés.

Satanicpornocultshop is global, linked with their fellow collagists, plagiarists and other plunderphonic counterparts (Kurt Schwitters, Negativland, John Oswald, etc). Human absurdity and its results are their main influence: the Iraq body count, Bush re-election (how can 59,054,087 people be so dumb?), a Japanese female worker trapped in a haunted hotel attraction in the Tokyo suburbs, the Creutzfeld-Jakob disease and its worldwide contagion, and so on...

When cutting worms and re-assembling them in a different order, do they still remain worms?

Why make new music when everyday the industry discharges a discontinuous flow of spoiled idols and reanimated heroes? Re-using fragments from this huge musical garbage dump, it is possible to create new meanings and suddenly catch a glimpse of our modernity and its excesses. But it becomes difficult to judge where exactly the nonsensical aspect of this newly created music comes from.
Is it really just because this type of new sound organization makes you feel funny? Or is it because we unexpectedly realize, by listening these bits of global collective unconsciousness scattered out of context, what kind of dumb mash the industry keeps feeding us.

Satanicpornocultshop chucks a puzzling, destabilizing and futuristic hip hop. One of the main features of this band is that they make music gush from the most arid field recording session. Give a Stanley knife or a red-bear shaped lighter to Ugh, and he'll make it swing in a snap. Ugh is a real human sampler, a junk sound edit virtuoso. And that is undoubtedly Satanicpornocultshop main strength. Just add to that an immense musical culture, a taste for ultimate groove and pop music satire, and you will have a pretty good idea of what makes that band so unique.

Satanicpornocultshop collective have been active since 1998 with their own label NuNuLAXNuLAN (blog) and CD-R sub-label NEJI."